With the study presented here, ReachOut Berlin has attempted to achieve its goal of bringing international attention to the situation of people exposed to violence motivated by racism. Of particular interest are the experiences and working situations that exist in the regions of Russia mentioned below to support the affected persons and their concerns. Additionally, the situation of (potential) victims is portrayed by the perspective of the representatives of the projects and other experts who are asked by the victims to give counselling and help but who cannot afford to provide this counselling and help to the extent needed. This provokes the central question of what kind of experience and resources are available to the projects and what kinds of support they need.

Since mid-2001 ReachOut has been active in counselling and supporting victims and witnesses of right-wing, racist and anti-Semitic assaults and threats in Berlin. ReachOut also researches, documents and publishes information about the assaults in order to reflect the extent of these violent crimes more realistically than the official statistics of the investigative authorities are capable of doing.

The unreported number of assaults on people who do not fit in with the world view of the perpetrators remains high. There are, however, a large number of independent initiatives, counselling projects and documentation centres that focus on documenting the extent of the violence and the situation of the victims, independent of whether the victims are in the position to press charges or not.

With the help of state support, counselling centres for victims of right-wing, racist and anti-Semitic violence were founded in 2001 in Berlin and the eastern German federal states. Despite unclear and precarious conditions, the projects were able to establish themselves and the staff members have become recognised as experts by representatives of the media, social scientists and policy makers. Contributing to this was the concrete counselling and above all the professional research and documentation work. This is why the number of assaults that the victim counselling projects publish is much higher than the numbers from the investigative authorities.

On the international level, very little is known about the right-wing, racist and anti-Semitic violence in Eastern Europe. As a result, the knowledge about the situation of victims and their family members is very limited even among experts.

From its research and counselling praxis in Berlin, ReachOut knows that the largest group to use its counselling services is comprised of those who are assaulted due to racist motives. That is why in recent years the team from ReachOut has been gathering substantiated knowledge and experience in regard to this group of victims.

Above all, the spectrum of perpetrators of violence motivated by racism should not be limited to organised neo-Nazis and their immediate environment. ReachOut sees a particular need for action in this field because racist attitudes and practices are socially and institutionally anchored in Russia just as they are in Germany. In the past, victims could frequently expect no professional assistance and were left alone to deal with the consequences of traumatic events.

The study was only made possible due to the close cooperation and exchange with multiple representatives of Russian projects and individuals who were open to questions and willing to give us interviews, discuss the issues, and to critically comment on and complete the first results of the study within the framework of a working meeting.

With this study, ReachOut has pursued its goal to support projects and their staff members who until now have worked with much dedication under difficult conditions. Conceptualizing, expanding and further developing the project required cooperation based on practical experience and partnership. A lot of patience and willingness on the part of international organisations were needed in order to support the study both financially and conceptually.

The main goal of ReachOut is to increase awareness of the situation of the victims and the lifelong consequences of these assaults, which occur so frequently. The study is an appeal to treat the affected persons with more empathy and respect so that they can be better protected from assaults in the future.

Published by ReachOut – Victim Counselling and Education against Right-wing Extremism, Racism and Anti-Semitism, Berlin. May 2011. 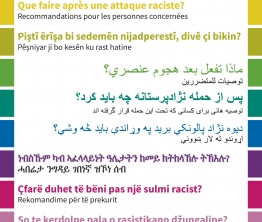 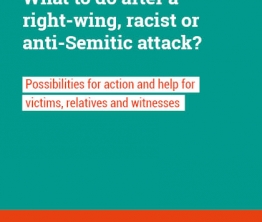 19.06.2019
This guide is aimed at people who have experienced right-wing, racist, antiziganist or anti-Semitic violence, their relatives and friends and witnesses of an attack. This guide is intended to help those affected to find their way in a non-routine situation by giving a brief guide to important questions and decisions.
END_OF_DOCUMENT_TOKEN_TO_BE_REPLACED
https://www.verband-brg.de/wp-content/uploads/2019/06/VBRG_was-tun_ENGLISCH_final.jpg 595 420 Keesi https://www.verband-brg.de/wp-content/uploads/2019/01/logo_vbrg_m3.png Keesi2019-06-19 11:55:222020-03-12 12:59:02What to do after a right-wing, racist or anti-Semitic attack? Possibilities for action and help for victims, relatives and witnesses. A guidebook.